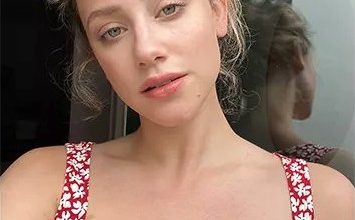 Quarantined With Lili Reinhart: How Slowing Down Has Helped Her Skin and Mental Health 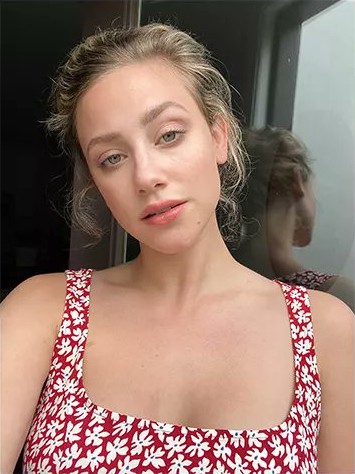 At the time of my conversation with Lili Reinhart, the world was at once still and whirling. She in Los Angeles and I in New York, the reverberations of COVID-19 had rendered us permanent homebodies, short-circuiting what we once knew to be routine. And when you’re a young Hollywood starlet with a budding calling card like Reinhart, an onslaught of static friction is especially palpable. Last year, the actress was both fighting and committing crime on screen (she played a rookie stripper arrested for racketeering alongside Jennifer Lopez in Hustlers, and had just wrapped season 4 of Riverdale where her character, Betty Cooper, discovered she could easily identify murderers as she herself carried a “serial killer gene”). But if art imitated reality during the height of quarantine, Reinhart would play a 23-year-old girl living with her dog while reaching a pivotal point of self-actualization.

“I started reading self-help books,” she tells me. “I think I looked at this period of time as an opportunity that is rare. The past couple of years have been so fast paced and kind of a whirlwind for me. And so to have the opportunity to slow everything down and let my body and brain catch up with the world around me and what’s happened and the transformation that I’ve had, it’s just been pretty rare and wonderful and special to have time to just be and figure myself out. I think I’ve grown a lot as a human being during this time, and I can feel it within myself. I’ve done a lot of work on myself, and then seeing my therapist regularly, I’m just reading these self-help books that are allowing me to look at the world differently. And I’m very thankful for this time. I think I’ve tried to make the best out of a really bad situation. I think that that’s all we can really do now. I can’t change the fact that COVID happened, but I can try to make sure that my experience during this time is not going to waste.”

As harrowing and rattling as the pandemic has been, in a strange way, the forced slow-down has allowed for more time for introspection and simplification. So while Reinhart has been growing and building and learning, she’s also found solace in taking a step back, specifically as it relates to her beauty routine. The actress is the face of CoverGirl’s Clean Fresh vegan line which boasts no-fuss, lightweight, glow-inducing products meant to let skin take center stage. The partnership has proven to be apropos for Reinhart who shares the same ethos—a “no-makeup makeup sort of situation,” she tells me.

“It’s weird because I was still in Canada filming Riverdale when [COVID-19] happened, and so I had to basically move back to L.A. kind of quickly. I had to kind of cross the border before they shut it. So I have so much skincare, just in general, and I left 90% of it in Vancouver when I had to come back to L.A. So it’s actually been incredibly interesting that my routine has been really simplified. I’m sticking to a handful of products, but it’s been working, and my skin’s doing well. I really have not been wearing much makeup at all, but when I do, it’s the Clean Fresh Hydrating Concealer, and then a nice little mascara, and then I fill in my brows, and I’m good to go. Being the face of a brand where this line represents clean beauty and natural skin and seeing your pores and letting your skin breathe, it fits really perfectly in line with my approach to beauty. I’m not the kind of girl who’s going to cake on foundation. I don’t like thick foundations. I don’t like super thick concealers. So, all these products are really lightweight, and your skin is able to breathe, and everything has a very beautiful, dewy finish. I’m not a super fan of a matte look; I think it can be beautiful for sure. But for me personally, I like a dewy finish on everything. And so all the products have a really beautiful natural dewiness to them, so that’s what I really gravitate to.”

Being rooted at home for the long term also lends itself to increased digital consumption, and when you have over 24 million followers on Instagram like Reinhart, it’s hard not to obsessively check your mentions. But a massive audience also gives way to widespread criticism, with which the actress is all too familiar. She’s been outspoken about the effect social media has on her mental health and happiness, so while she’s still clocking the screen time in quarantine, she’s choosing to largely spend it reading and watching film.

“In general, I always feel guilty for being on my phone a lot, and I wouldn’t say I’m that bad. I really am not the kind of person who’s on their phone all the time. Some people are definitely a lot better at it than I am, but I know a lot of people who are a lot worse than I am and checking their phone constantly and never putting it down. I definitely feel better mentally when I’m away from my phone. When I’m either reading a book or just focusing on something else, it’s kind of like ‘Oh yeah, I forgot that social media was a thing for a second.’ Like it felt good to be without it for a few hours. It always feels interesting when you realize you haven’t checked Instagram in like, two hours. I guess if I’m going to stare at a screen, I’m going to try to read a book on my computer or read a script or watch a film or TV show that I’ve been wanting to see. So I think it’s kind of like, that’s where I’m trying to put my attention rather than social media, because social media is very anxiety-inducing for me and for a lot of people, so I just hate it. It’s an evil thing, but it’s necessary to kind of feel like you’re in touch with the world. It’s a double-edged sword—I kind of can’t live with it and can’t live without it.”

As our phone call draws to a close, I ask Reinhart what she’s looking forward to most when businesses reopen—specifically which treatments she’ll book. Like friends and colleagues I’ve spoken with who pine for a pedicure or a root touch-up, Reinhart also has a laundry list of appointments. “I need to get a facial. I need to get a massage. I need to see a chiropractor. I need to get my highlights done. I need to go to Pilates class. I just can’t wait until everything’s back to normal because I want to feel like a human being again, but I’m really looking forward to doing a massage. I will say that.”