And it was asked that the soul and body might unite, and they did 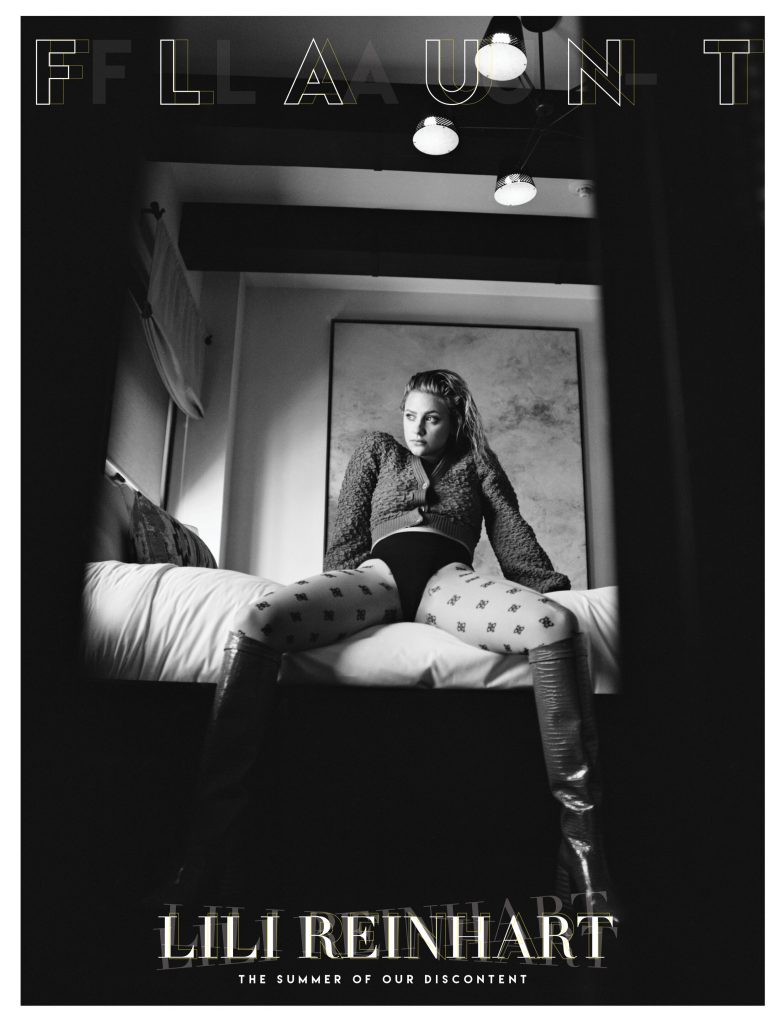 In a regular world, Lili Reinhart—best known for her acclaimed turn in the CW sitcom Riverdale and the crime drama Hustlers—would be seated at a plush West Hollywood hideaway, occupying a quiet low-lit nook for a tête-à-tête over cocktails to cheerily discuss upcoming projects she has in the works. Yet, nothing is normal right now. With a citywide lockdown still in effect and a wave of civil unrest flooding the streets, the traditional meet-and-greet has been ditched for a social-but-distant conversation from her Los Angeles home.

The 23-year-old Cleveland-native, photographed in downtown Los Angeles’ Hotel Figueroa, is soft-spoken yet refreshingly unscripted and poised. She peppers her quarantine tales with expletives like basketball dunks to add emphasis to her rhetoric. She speaks in a singsong of passion-fueled inflections and a low-octave stream-of-consciousness, rather than the carefully orchestrated interview full of boundaries and topics deemed off-limits by a team of handlers. With one intimate anecdote after the next, Reinhart spans her childhood all the way up to the new abnormal in which we currently grapple with too many preventable Covid-related deaths, our nation’s largest economic downturn since the Great Depression, and an energized civil rights movement guided by the Black Lives Matter (BLM) movement in the wake of the brutal police killing of George Floyd in Minneapolis.

“I’m not the same person I was when I flew back from Canada to get back into the States when the borders closed,” Reinhart says. “The past few years have been so hectic. I often refer to it as a whirlwind. I’ve been using this time [in quarantine] to let my mind, body, and soul catch up with one another because they can get really muddled. Everything just happened so fast since I started my career that I didn’t have the time to process much.”

Without much probing, our discourse casually weaves in and out of the Riverdale star’s personal battles with lifelong social anxiety and depression, the ontology of grief, quarantine as a sacred space for deep self-reflection, the BLM movement, her public coming out, and last, but certainly not least, the creative irons that she has in the fire: namely, a noteworthy teen psychodrama Chemical Hearts and her debut book of poetry entitled Swimming Lessons––both slated to release late-summer, early-autumn, respectively.

“I was always a performer, even as a kid,” says Reinhart. “I always put on shows for my family and played dress-up. I was also a dancer, so I did a lot of recitals.” A born entertainer, she avowed that despite her lifelong knack for performing, she was not interested in being a spotlight-stealer, and still recoils at the thought of being the center of attention. She prefers to fade into the background, attributing it to crippling levels of social anxiety that plagued her for as long as she can remember.

“In my childhood there were instances where I would refuse to attend birthday parties for other kids, simply because I was too attached to my mom,” she admits. “I could not leave the house because the separation anxiety was crippling. When I finally got to elementary school, I always cried out for my mom. I was one of those kids. It’s insane to think back on now because I’m such an independent person.”

Reinhart’s maladaptive attachment anxiety at an early age, along with her openness about her uphill battle with social anxiety, is a hopeful sign that destigmatizing mental illness publicly is unequivocally a cultural step in the right direction.

“What I’ve learned from losing a family member and my pet is that grief is the hardest human emotion to experience,” she says. “A lot of people don’t allow themselves to actually experience this uncomfortable and painful feeling. I’ve been taking this time to read a lot of self-help books and articles. People often find ways to distract themselves in order to not feel pain. So, I took the road less traveled, and wanted to feel everything that I needed to feel in my grieving process.”

Grief is the focal leitmotif of Reinhart’s upcoming film Chemical Hearts––an adaptation of author Krystal Sutherland’s boy-meets-girl teen-fiction novel Our Chemical Hearts––in which the actress portrays an emotionally perturbed writer by the name of Grace whose ex-boyfriend died and in her grieving process, she finds it difficult to regulate her emotions. “For so long, I wanted to do a film that’s really raw and emotional, and act in a role that would push me in a way I haven’t been pushed before,” she says, about working on the film. “I actually allowed myself to fall into a depression to really tap into my character in the film.”

Chemical Hearts contains a labyrinth of dark tropes that transports like-minded former sad-girl teens to the formative years they spent dwelling on depression, experimenting with drugs, and pondering the consequences of suicide. Her first-ever book of poetry Swimming Lessons, she assures me, is just as visceral. “I look at it as a book of tiny stories fueled by human emotions. It’s almost weird for me to call myself a poet since I’m not what you would call a ‘classical poet,” she explains. “I don’t fucking rhyme, or have perfectly metered haikus, or anything along those lines. It’s more an exploration of human emotions with pretty words.”

Avid in her activism, Reinhart buoyed her social justice advocacy to new heights by using her platform of 23 million Instagram followers as a tool to amplify BIPOC voices. She has since virtually hosted a strong coterie of BIPOC authors and activists for one-on-one salon-style conversations that aim to unveil the Black narrative and educate viewers on the tenets of being an anti-racist.

“I felt that I wasn’t doing enough,” she confesses. “And I felt that it was lame to keep reposting what everyone else is posting so I asked myself: ‘Okay, what do I have to offer?’ I definitely learned a lot from the conversations I’ve been having. While it’s important to be an ally in this movement, Black voices cannot be muffled by other voices. This is their time to be heard. White people have to acknowledge their fucking privilege, which exists, and is very real. It’s important that we don’t just sit on our asses and let someone else fight this fight for us because it involves absolutely everyone.”

Reinhart attributes her publicly coming out as bisexual to the solidarity she felt while marching and picketing alongside the LGBTQI+ community at her first BLM protest in West Hollywood which has been coined by some as the North Star of L.A.’s “gayborhoods.” “It was incredible to be surrounded by so many people who are actively fighting against the injustices that are happening right now,” she says. “Enough is enough and hopefully we’ll see real change from the actions that are now being taken.”

Reinhart claims that she has been a longtime silent supporter of the LGBTQI+ community. “I knew full well that I was attracted to women from a young age,” she concedes. “I felt that since I’ve exclusively been in hetero-normative relationships, it would be too easy for any outsider, especially the media, to vilify me and accuse me of faking it to get attention. That’s not something I wanted to deal with. But to my close friends, and those in my life, my bisexuality has been no secret.”

As high-risk counties and states across the country plan for phases of reopening, Reinhart is poised to return to the spotlight she never craved, but has certainly achieved. She will emerge, as we all will eventually (hopefully), renewed by the calm she has been lucky enough to foster amidst the chaos that surrounds her adopted city.