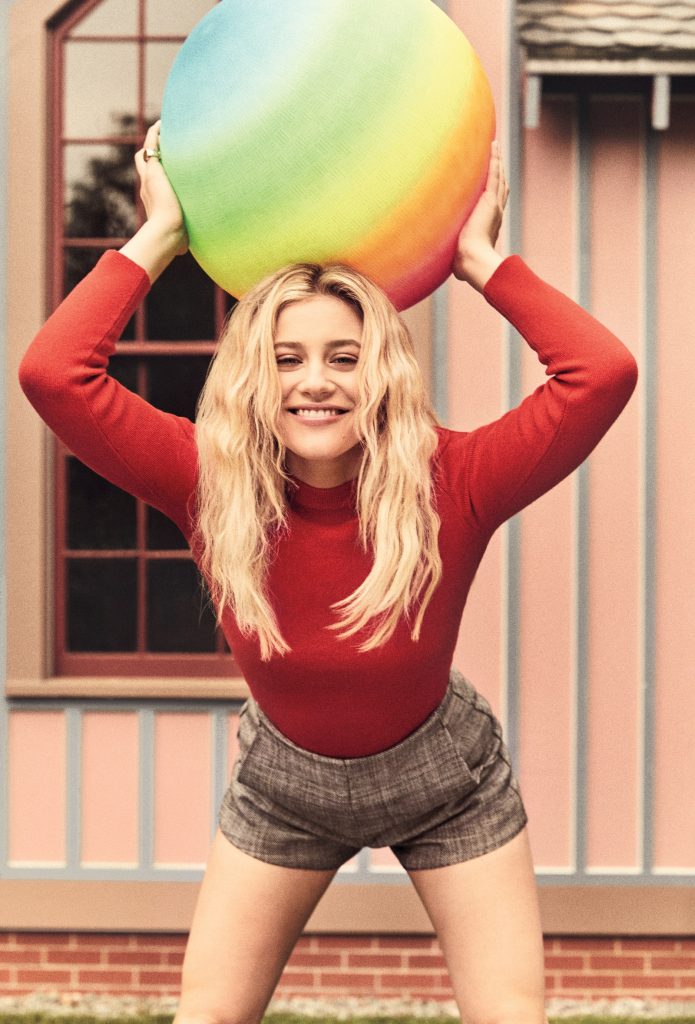 Lili Reinhart is sitting in a Victorian garden in Irvington, New York. The birds are chirping, and the sun is shining on her blond hair. It’s a scene that makes it laughably easy to conflate real-life Lili with her onscreen alter ego, Riverdale’s perennial “good girl,” Betty Cooper. But the actress wants to make something clear: You may feel you know Betty—but you don’t know Lili. “I’m a very open book about a lot of things,” Reinhart says, “but at the end of the day, if I don’t know you, you’re a stranger.”

Riverdale, for the uninitiated, is the CW’s noir, ­modern-day adaptation of the midcentury Archie Comics universe. Betty still has her uniform of saccharine colors and a perky ponytail, but this version has a lot more agency. No more fighting with Veronica over Archie’s attention—Reinhart’s Betty is too busy catching serial killers.

It’s Reinhart’s first major role, and it catapulted the 22-year-old Cleveland native to Hollywood next-gen status with a passionate teenage fan base. She’s recognized as Betty everywhere she goes: in Vancouver, where Riverdale films; in North Carolina, visiting her parents; and at difficult, private moments, like a memorial service with her family in Massachusetts. And most encounters share one element. “It’s never like, ‘Are you that person from River­dale?’” she says. “It’s ‘I know who you are.’ ”

There’s a reason her fans (more than 13 million followers on Instagram and Twitter combined) feel they know her. She’s been outspoken on various platforms about deeply personal topics like mental health (she’s battled depression and social anxiety since she was a teen), body image (when Internet trolls suggested she was pregnant, for example, she hit back with a succinct reply: “This is just my body…sometimes I’m bloated”), and #MeToo (Reinhart wrote a Tumblr post about her own experience with sexual harassment).

She even goes there on the issue that’s the hardest for her: her skin. “I cried last night to my mom over FaceTime because of how ugly I felt I looked,” Reinhart says. “My skin has caused me a lot of anxiety and sadness.” Just one zit can ruin an entire day, she says. “I have a specific type of body dysmorphia that stems from acne. I see any acne on my face as an obsessive thing. [It’s] the only thing I can think about, and it makes me want to hide.” Opening up about the insecurities that gnaw at her has helped her find new avenues of support. “Lorde actually messaged me on Instagram when I had spoken out about my acne,” she says, “and she was like, ‘Girl, I feel you. I’m totally on the same page as you.’ It was really comforting and very sweet of her.”

But like any young woman navigating social media, Reinhart is trying to find where to draw the line. She likes being open but needs to have some boundaries. “I haven’t really shown the super vulnerable side of myself to my audience,” she says. “If I did that, I wouldn’t have anything left for myself.” So she goes deep only on the issues she feels comfortable sharing. “I talk about my mental health. I talk about depression. But I’m private about the things that I want to be private about.” (Such as her rumored relationship with costar Cole Sprouse. She’s hinted that they’re close—in a recent Instagram post she called Sprouse “my love”—but neither has confirmed they’re a couple.)

And she’s trying to find a way to cope with something largely out of her control: covert photos by fans and paparazzi. “It’s only been two years that I’ve been semi in the spotlight, and it still pisses me off so bad when I see someone trying to sneak a photo of me,” she says. The idea that she can be photographed whenever, wherever, makes her feel “like a zoo animal.” But she doesn’t let it take over her life. “Sometimes I feel like I look like shit. Sometimes I don’t want to talk to anyone. And it’s like, I’m allowed to have those days,” she says. “I’m not going to apologize for that.”

In other words, women are multifaceted. They can share things and keep secrets. They have good days and bad days, and more important, they shouldn’t be labeled or put in a box. Not even Betty Cooper. For Riverdale’s first two seasons, Reinhart’s Betty alternated between a studious do-gooder and a Dark Betty hell-bent on revenge, complete with a black wig and lingerie. “It’s such a strange concept, the whole Dark Betty thing,” she says. If having complicated feelings is “dark,” she says, “[I’d] be Dark Lili all the time.”

In Riverdale’s third season, which premieres on October 10, Reinhart is optimistic that Betty’s two sides will finally unite in a single, nuanced character. “I think she’s not as innocent as the pink sweaters and Peter Pan collars make her out to be,” she says. “She’s evolving into a woman. She has a darker side and she has a lighter side, but they’re not split into two personas. It’s not that crazy for people to have dark sides. Everyone has a dark side.”

As she smiles for the camera in this sunny garden, Reinhart talks about an upcoming, much-needed trip with her family—people she can be her whole self with. It’s days like this, when the weather is nice and the work fulfilling, that all the self-doubts fade into a background haze rather than claim center stage. “It’s just a reminder to myself that there are bigger things happening here,” Reinhart says. Like sticking to her mission of changing the conversation around acne, body image, and mental health. “If people could just open their eyes a little bit and see there’s a wider range of beauty,” she says, “there’d be so much more happiness.”