Lili Reinhart Is Just Being Honest 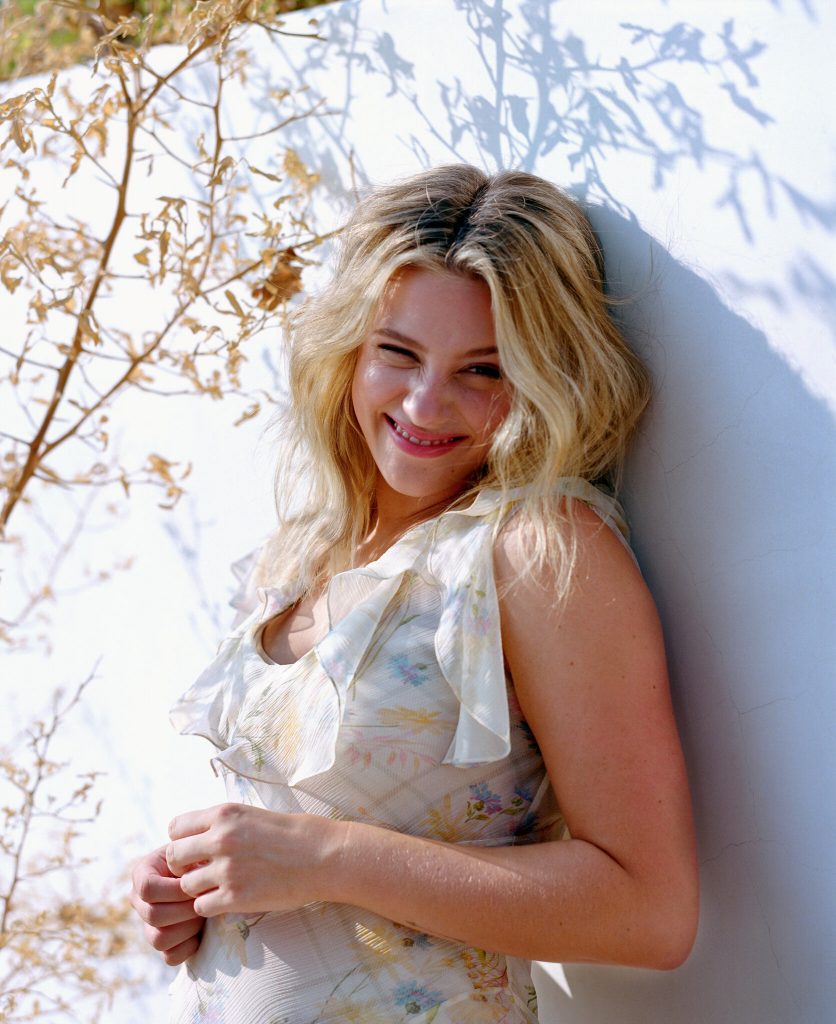 The “Riverdale” star is reluctant to call herself an activist. But she has a lot to say and isn’t afraid to do so.

Lili Reinhart has been outspoken for almost as long as she’s been famous. The star of the popular teen soap “Riverdale” has openly discussed her struggles with anxiety, depression and body dysmorphia. She has also been vocal about women’s reproductive rights, white privilege, her disapproval of President Trump and the public’s undying fascination with Brad Pitt and Jennifer Aniston.

She didn’t set out to make candor her calling card. “I had no idea three years ago that I’d be known as the girl who talks about her depression all the time,” Ms. Reinhart, 24, said in a video call from the backyard of an Airbnb in Vancouver, where “Riverdale” is filming. “Is that something that I necessarily would have tried to seek out? No, but I’m glad that that’s how it happened.”

As she sees it, she’s just being honest. “I’m the kind of person where, if I’m struggling with something, I need to talk about it. That’s the only way that I can get through it,” Ms. Reinhart said.

In a poem from her new book, “Swimming Lessons,” which hit bookstores this week, she put it another way: “I’ve only told the world/ what I feel,/ not how to overcome./ It feels fraudulent to be given/ a pat on the back/ for simply telling the truth.”

Her Rise to ‘Riverdale’ Star

Ms. Reinhart grew up in Cleveland, the middle of three sisters. Her father worked in sales, and her mother worked in home health care. She had theater-kid tendencies, which her family encouraged. This eventually translated into attending open casting calls and taking eight-hour drives to New York City for auditions.

“I didn’t come from anyone who knew anything about the industry,” she said. “I really have to give credit to my mom who went out of her way to help me pursue these options as a young 13-, 14-year-old, who was like, ‘I just want to act.’”

At 16, her family moved from Ohio to North Carolina. She decided to finish school online so she could focus on acting, self taping audition after audition. “I hated being a teenager,” she said. “I hated going to school. I hated a lot of things. I didn’t enjoy life at that point.”

She tried her hand at a slew of jobs. There was the five-hour stint at a bakery; she quit after a severe panic attack during her first shift. She was a hostess at a restaurant for a few hours, then had another panic attack and quit. She was able to hold down a sales associate role at Pier 1 Imports, where she could hide in the back room, breaking down boxes. “Acting was genuinely the only thing that I could do that didn’t give me anxiety,” she said. “This is kind of it. I really don’t have a backup plan here.”

She moved out to Los Angeles alone at 18, where she’d spend her days waiting for auditions to trickle in. For Ms. Reinhart, who has dealt with depression since 13, her time there was isolating. She didn’t know anyone in the city and wasn’t making enough money to survive. “I was very unwell, mentally,” she said. “I was throwing up every night from depression.”

Five months later, she moved back home and returned to therapy. She worked in retail to save money. She gave herself one more year in L.A. and planned to become a makeup artist if acting didn’t work out. A month after her return to L.A., at 19, she landed a starring role on “Riverdale” as Betty Cooper, a gritty Nancy Drew-like take on the sunny girl next door from the Archie comics.

“We’re constantly putting poor Betty through the emotional ringer,” said Roberto Aguirre-Sacasa, the showrunner. “Part of the reason is Lili is such a phenomenal, soulful actor and she could handle it. Some characters, we try to add darkness to them, and it didn’t sit right. But with Betty, we found Lili could absorb every trauma and challenge before her and turn that into an incredible performance.”

Ms. Reinhart refers to herself as a “CW girl” a lot, but “Riverdale” has opened other doors for her: a breakout role in “Hustlers” alongside Jennifer Lopez, homeownership, the ability to produce films and, now, her first book.

‘Poetry Is Becoming a Big Thing These Days’

Production for “Riverdale” halted in March because of the pandemic. For Ms. Reinhart, it was a relief. “I was honestly run dry. I was working six days a week, 16 hour days, I was beyond exhausted,” she said. “I was reaching a breaking point and then Covid hit, and then I didn’t work for five months.”

She spent quarantine working on herself, and moved into her first home, in the San Fernando Valley, in June. She did weekly therapy, read self-help books and spent time with close friends. She worked with a healer and learned how to meditate. And she wrote more poetry — a passion she discovered at 16 while searching for words that were “pretty enough” to send to a long-distance boyfriend.

“Poetry is becoming a big thing these days. People read poetry like Rupi Kaur and Lang Leav,” she said. “You see it in Urban Outfitters, just books of poetry, and I love that. And so I was like, well, I’ll add my hat to that. I want to be a part of that.”

Ms. Leav herself is a fan of Ms. Reinhart’s work, and her fortitude. “Having the thrill of your work connecting with people and also being a draw for internet trolls, especially as a woman, being vulnerable and putting yourself out there — she’s handled it so well for someone so young,” she said. “I don’t know how I would’ve behaved if I had been in my early 20s and had that kind of attention.”

Many of the poems in “Swimming Lessons,” which were written over five years, revolve around love, heartbreak, grief and the fleeting nature of time. “I wanted to kind of step outside this box of being a CW actress,” she said. “I was able to be vulnerable, and my poems are very much stemming from my real emotions, but I do look at them as fictional stories rather than like pages from my journal.” (There’s also a disclaimer in the opening pages saying as much.)

Those who have followed Ms. Reinhart’s relationship with her “Riverdale” co-star Cole Sprouse will find opportunities for speculation about their relatively private romance in the book. Mr. Sprouse wrote on Instagram that the couple ended their relationship in March.

When asked how she might feel if fans projected that relationship onto the poems about heartbreak — particularly the ones about infidelity — she paused.

“I stopped allowing myself to be afraid of the connections that people were going to make,” Ms. Reinhart said. “And I think, you know, I have been cheated on. I’m not going to give the details, but I have experienced that. Cole’s not the only human being that’s been within my life, so people can assume that it’s him — I’m never going to confirm or deny.”

In June, Ms. Reinhart came out as bisexual to her 25 million followers on Instagram. “I think the reason why I hadn’t spoken out about it is because I was afraid of people telling me that I was doing it for attention,” she said.

Coming out was also a way to show solidarity with the broader activist community. In her Instagram announcement, she included details for an L.G.B.T.Q. Black Lives Matter protest she said she would be attending.

In May, her castmate Vanessa Morgan posted a series of tweets about the treatment of Black characters in the entertainment industry, who are often relegated to sidekicks or stereotypical roles. Mr. Aguirre-Sacasa, of “Riverdale,” issued a public apology, promising to do better.

“Roberto called all of us after that happened and was like, ‘I just want you to know, I talked to Vanessa, I heard everything she has to say, we’re going to do everything we can to make sure that we right this wrong,’” Ms. Reinhart said. “I think our show is definitely going to try to just be better about being more racially diverse and making sure that our secondary characters have actual story lines and aren’t just kind of there as an accessory to the white characters.”

Having millions of followers also means that Ms. Reinhart’s actions are subject to heavy scrutiny. In June, she posted a topless photo to Instagram alongside the caption: “Now that my sideboob has gotten your attention, Breonna Taylor’s murderers have not been arrested. Demand justice.”

The backlash was swift. Many observers called the post insensitive, pointing out that it was another instance of someone trivializing Ms. Taylor’s death by turning it into a meme. Ms. Reinhart quickly deleted the post and apologized.

“Before I posted that, I turned to my friend and I was like, ‘Are people going to take this the wrong way?’ I wanted to get people’s attention,” she said.

In the aftermath, she deleted Twitter off her phone. “This is not the first time I’ve been on the other end of some internet hate,” she said. “I’ve experienced it many times. And I think it’s because I speak out about things, so I’m inherently going to attract some negative attention.”

Before that, she had begun broadcasting a series of live discussions with Black activists and artists, including her former “Riverdale” castmate Asha Bromfield, who also said she felt sidelined on the show.

“It was intimidating to kind of put my naïveté in public,” Ms. Reinhart said about the conversations. “I’m a white, blonde woman, I am never going to experience the discrimination that a Black woman or trans woman faces.”

Still, she felt a responsibility to elevate the voices of people who lived those experiences. “What did I have to offer in this situation? A platform,” she said. “And so that’s what I was going to do. I was going to use my platform.”